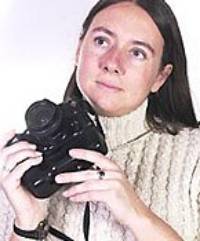 Gillian Jones has been teaching introduction to photography at the Massachusetts College of Liberal Arts since 2001. She has been chief photographer of the North Adams Transcript, daily newspaper, since 1992. She is a frequent news writer and columnist and writes a monthly column about her adventures with living with her two dogs. She has been growing a successful wedding photography business since 1995 and does freelance work for area businesses and publications across the nation.

In addition to her daily photographs in the North Adams Transcript, she has also had her work published in the Berkshire Eagle, The Advocate, The Bennington Banner, The Boston Phoenix as well as nationally through the Associated Press, The Globe and Yankee Magazine.

She has traveled across the continental United States and abroad to France, Italy, Spain, Morocco and Mexico through her association with the college.

Her work has been exhibited at MCLA, the Heritage Sates Park Gallery, the Adams Town Hall Gallery, North Adams Regional Hospital and various restaurants as well as area businesses. Her work is presently on display and for sale at Papyri Books in downtown North Adams.

She was born in Queens, NY in 1969. She grew up on Long Island before moving to the Berkshires with her family in 1982. She graduated from Mount Greylock Regional High School in Williamstown in 1987. Studying English Communications with a concentration in Journalism and a minor in Philosophy, she graduated from North Adams State College, not the Massachusetts College of Liberal Arts in 1991. She resides in North Adams with her two dogs, Madison and Dante. "I am so fortunate to be able to make a living doing something I love," Jones said. "I literally eat, sleep and breath photography-everyday of my life."