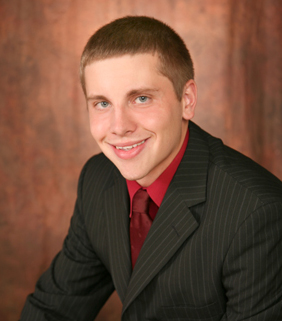 Long fascinated with how the world operates, James Chapman ’15 earned double bachelor’s degrees in math and physics. Now he’s earning his Ph.D in materials science and engineering at the Georgia Institute of Technology, where he is the senior graduate student in his group and the lead on two distinct research projects.

His ultimate goal is to design an automated system that can discover new materials with no human input, eliminating most of the cost and time to design new materials.

Chapman will deliver the keynote address at the 16th Annual Undergraduate Research Conference (URC) on Thursday, April 19, at 12:30 p.m. in the Amsler Campus Center gymnasium, where he will speak on “Materials Informatics: A Fresh Perspective from the Past.” He also will discuss his work, as well as the research he did as an undergraduate at MCLA with Dr. Liz Hartung, assistant professor of mathematics.

As part of his Ph.D program, Chapman continues work he conducted at the Los Alamos National Lab in New Mexico, where he was a visiting researcher last fall. At Los Alamos, he worked with a theoretical materials group that looked at diffusion mechanisms on metal surfaces.

“Atoms on a metal surface can take a variety of different paths to move around,” Chapman explained. “The problem is, the paths are often very complex, so it’s difficult to predict which ones are more likely than others. I worked to use our machine learning force fields to help with these predictions.”

The lead on the project, he and the others in his group identified several diffusion mechanisms, “and I am working to create an automated procedure for the prediction and adaptive improvement of our models when encountering such mechanisms, Chapman said.

The math and physics he studied at MCLA are essential to his work. “The advanced math courses I took gave me a solid foundation for understanding the mathematics behind not only the physics and chemistry at play here, but also the machine learning, which is entirely advanced statistics and calculus.

“My physics background helps me analyze and understand the results I get from the molecular dynamics simulations. I was required to take several computer science courses as part of the math major, but I took several more because I enjoyed coding,” Chapman added. “The computer science course I took at MCLA to learn the C++ programming language was extremely valuable.”

As an MCLA student, Chapman participated in two URCs, which helped prepare him for graduate school, by refining his presentation skills. “It’s one thing to be good at what you do; it's another thing to convince other people that you’re good at what you do. The URC helped out immensely.”

For students who are looking for an affordable STEM (Science, Technology, Engineering and Math) program with individualized, quality instruction and ample opportunity to take initiative and pursue their own research, “MCLA is the place,” Chapman said.