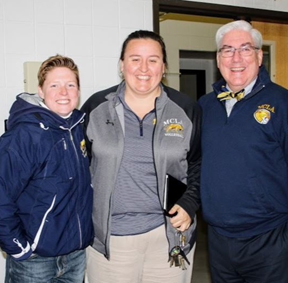 The Tucker Center for Girls & Women in Sport’s recent report marked the first time in the six-year history of its Women in College Coaching Report Card research series that any institution received an ‘A’ for having 100 percent of its female teams led by women head coaches. And this time it wasn’t just one – but three – colleges that made the grade.

According to Director of Athletics Laura Mooney, at the time the research was gathered for the report, all of MCLA’s women’s teams were coached by women. Joining MCLA in this distinction were Mitchell College of New London, Conn., and Sweet Briar College of Sweet Briar, Va.

“It’s very exciting to earn an ‘A’ for having all of our women’s teams coached by women,” Mooney said. “It’s an impressive accomplishment, and something to be proud of, for sure.

“This is a real hot topic issue in the athletics industry. How do we grow women in athletics? A lot of it starts with the concept of showing women that certain careers are possible,” Mooney explained. “There aren’t a lot of young girls who grow up and say, ‘I want to be an official or coach.’ But now there’s a female official working the NFL circuit, and we have women coaching in the NBA.”

Mooney should know. When she was hired as MCLA’s Director of Athletics three years ago, she was the first woman to lead the department and one of the youngest women in the country to hold the position.

“Blazing trails in these areas and showing young women that they can grow up and serve in leadership positions is important. It gives them confidence. Women are in the minority in athletics leadership, so it’s really important that we are empowering and mentoring women in those ways. This mindset really can change the industry as a whole.”

Mooney points out that men don’t grow up playing softball or women’s lacrosse – both of which are specific to women only. Why then, are the majority of these teams coached by men?

Having strong female role models goes far beyond athletics, she continued. “It’s critical for young women to know that they can achieve the same goals and be just as successful as men. Maybe they want to be the president or a CEO of a company, or a lead scientist, or a doctor Just knowing that they can hold a leadership position is really what it’s all about.”

The longitudinal research series, now in its sixth year, is a partnership between the Tucker Center for Research on Girls & Women in Sport at the University of Minnesota—the first research center of its kind in the world—and the Alliance of Women Coaches, an organization dedicated to supporting and increasing the number of women in the coaching profession. The comprehensive report examined NCAA Division III institutions.