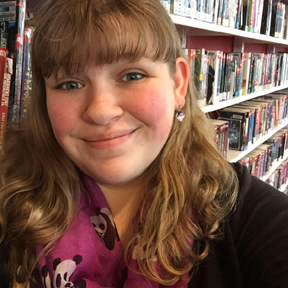 What started as volunteer work morphed into a fulltime job that Emily Boughton ’15 loves. As the new young adult specialist at the Athol Public Library Center Library, she uses what she learned from MCLA’s art and psychology programs to benefit the entire library, and its patrons.

Although she majored in art and minored in behavioral analysis at MCLA, Boughton brings significant experience to her new position, which includes working at the Freel Library as a college student. However, her library experience began much earlier, when she was a teenager.

At the Athol library, she served as a high school “page,” and was a member of the volunteer “Teen Advisory Board,” where she helped with various activities, such as fundraisers. Boughton also worked there over the course of one summer, while in-between semesters at college.

After graduation, she began working part time in the library’s children’s room.

“I had always been very connected with the previous youth adult librarian, who was there for 20 years. She was a mentor to me when I was in high school, and I worked closely with her,” Boughton said. “When I was in the part-time children’s position, I helped her in the teen area. So, when she retired, I applied.”

In her new job, she frequently calls upon the skills and knowledge she acquired at MCLA as she creates posters, displays, and helps with graphic designs for various publications that are sent out to attract more patrons.

Boughton also is involved with many of the library’s art programs. She teaches a variety of classes to teens such as how to draw manga – Japanese comics that conform to a style developed there in the late 19th century. In addition, she leads monthly crafts classes for adults, including on how to make paper beads and handmade cards.

Beyond her college degree, Boughton pursued professional library training through the Massachusetts Library System to earn certification as a paralibrarian.

As she makes the position her own, she is increasing the library’s social media presence. An avid Harry Potter fan, Boughton also enjoys red pandas and the Marvel Universe, and makes sure there are plenty of books that teens enjoy. “I’m expanding our graphic novels section, another of my favorites, to make sure we have a full collection. I’m also adding some non-fiction books.”

At MCLA, Boughton loved the small school atmosphere. “When I went to look at the campus, there were three rainbows,” she laughed. “But, of all the schools that I looked at, it felt like home.”

As a student, she went on to serve as a photojournalist for the Beacon, MCLA’s student-run newspaper, and also was involved as an ally with the Queer Student Union. Because of the many art courses she took, Boughton participated in multiple projects with area art galleries.

And, “All of the psychology courses I took help me to have a different perspective, especially dealing with teens and understanding why they act in certain ways. I have that extra knowledge of what might be going on,” she said. “I can definitely see myself in this career for a long time. I have a love and a passion for what I do. It’s a very nice fit.”