With a Push from His Former MCLA Coach, Jason Mlodzianowski 07 Made Sports His Career 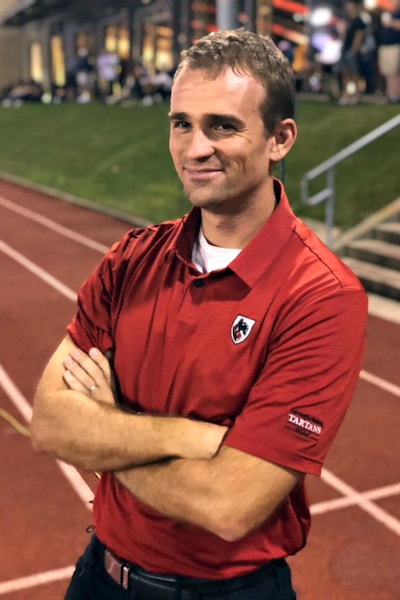 “I’m very fortunate to be in the situation I’m in. I get to work with sports every day at a world-renowned university. I’m surrounded by great people and I’ve had the opportunity to learn from some fantastic leaders," says Jason Mlodzianowski '07, associate director of athletics at Carnegie Mellon University.

Jason Mlodzianowski ‘07 is celebrating his seventh year at Carnegie Mellon University in Pittsburgh, Penn., where he serves as the associate director of athletics for events, facilities, and operations. Hard work got him to the finish line, but a little push from a former MCLA coach is what got it all started.

A native of Schenectady, N.Y., Mlodzianowski graduated from MCLA with a bachelor’s degree in history. While at the College, he was a four-year letter winner for the Trailblazers men’s soccer team and the team’s captain during his senior year.

Six months after graduation, said Mlodzianowski, Trailblazers Head Men's Soccer Coach Adam Hildabrand contacted him to find out how he was doing and to push him to apply to graduate school. “I value the personal relationships with professors and other mentors I had at MCLA,” says Mlodzianowski. “They gave me the insight and motivation to kick off a career, which I’ve been in now for 10 years, and I love it.”

Mlodzianowski earned his master’s in athletic administration from Springfield College in Springfield, Mass., in 2013. He gained valuable experience working in the championships department of the Eastern College Athletic Conference (ECAC), as well as the athletics event management departments at the University of Connecticut and the University of Missouri before joining Carnegie Mellon in 2013.

Originally hired as an event manager and coordinator of athletics facilities, Mlodzianowski worked his way up to assistant director of athletics for events, facilities, and operations before being promoted to his current job as associate director in 2018. During his time at Carnegie Mellon, Mlodzianowski has also served as tournament director for multiple NCAA soccer events, as well as the 2014, 2016, and 2018 NCAA men’s tennis regionals.

“I wear many hats,” said Mlodzianowski about his current position. He is in charge of events operations for the college’s 19 sports, as well as facilities — from the equipment room to the college’s sports fields. He supervises five full-time staff members, oversees the athletics department’s communications and marketing team, serves as sport administrator for the men’s and women’s golf programs, and his presence is required at all varsity home events. The former mentee is now a mentor, as an advisor to Carnegie Mellon’s Student Athlete Advisory Committee (SAAC).

“I’m very fortunate to be in the situation I’m in,” said Mlodzianowski. “I get to work with sports every day at a world-renowned university. I’m surrounded by great people and I’ve had the opportunity to learn from some fantastic leaders. I’m grateful to be able to serve and mentor a superb set of student athletes who I learn from every day.”

Mlodzianowski sees working at Carnegie Mellon, in a Division III athletic department, as going back to his MCLA roots.

“[MCLA] was a great fit for me because it was a small public school where I could get my hands on a lot.” Mlodzianowski is glad that he took advantage of opportunities to lead on the soccer team and in student government. The small setting, he said, gave him an opportunity to succeed, which is something he’s happy to pass along to his Carnegie Mellon students.