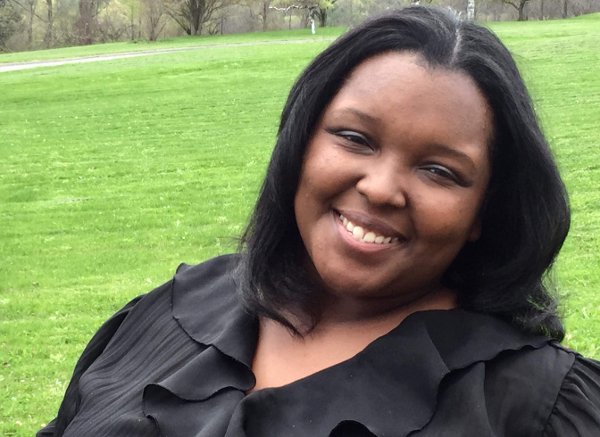 As performing arts major at MCLA, Brittany Nicholson '16 was able to use her talents working on (and in) multiple college productions, and was a part of Harlequin and the Allegrettos.

At this point, Brittany Nicholson ’16 is a seasoned performer. She’s appeared in more than 15 productions, from Shakespeare to “The Vagina Monologues”—but over the summer, she appeared in her most challenging role yet.

Make that “roles”: Nicholson played nine characters in “Until the Flood,” a one-woman play by Dael Orlandersmith about the social unrest in Ferguson, Mo., following the shooting of teenager Michael Brown. Presented at Pittsfield’s Whitney Center for the Arts and directed by Monica Bliss, the Center’s artistic director, the 90-minute play zooms in on the perspectives of a retired school teacher, a retired police offer, a street kid, a high school teacher, a barber, a high school student, a minister, a poet and a racist.

To prepare, Nicholson did a lot of research—into Missouri accents, and into perspectives. “I spent a lot of time listening to old white men,” she said. “Everybody was completely different—it took me a lot of time to get each character down. A couple of the characters were really hard, and it took a while for me to get to the point where I could find a reason to understand them and where they’re coming from.”

Some characters were easier to inhabit than others. Nicholson related most to the high school student character, Paul. “I know what it’s like to go to a bad school where there are gangs, and you’re trying to do good,” she said. “But sometimes you are put in a category because of your race. I know where he’s coming from. He wants to do good, wants to go to college. There are a lot of kids like that out there. I was that kid—taking extra courses, staying after school, and tutoring.”

Nicholson grew up in North Carolina before moving to Pittsfield in her junior year of high school. “In the community I grew up in, there were gangs, violence, cops shooting kids…a lot of kids dying. I’m not an angry person, but I can understand that anger,” she said.

After moving to Pittsfield, she attended Taconic High and acted in many productions there. While playing Horatio in the Fall Festival of Shakespeare’s production of “Hamlet,” she realized that acting was her calling. After performing in another Shakespeare production, she was offered a role in another show, where Monica Bliss saw her, and asked her to perform a piece in the Whitney Center’s production of “The Vagina Monologues.”

As performing arts major at MCLA, Nicholson was able to use her talents working on (and in) multiple college productions, and was a part of Harlequin and the Allegrettos. She also earned a travel scholarship that covered a school trip to Prague in the Czech Republic, where she attended the Prague Quadrennial, an international showcase of performances, exhibitions, symposia, workshops, residencies, and educational initiatives. “I think MCLA was one of the best experiences I’ve had. I always look back on the time I spent there,” she said.

In the Berkshires, “it’s nice to live in a community where you can be recognized and people know you. It’s close knit—all the actors and directors know each other,” she said. She’s so well-known in the Berkshire theatre community, in fact, that she has performed in seven shows in the past year and a half. “Directors see you in something and know your abilities, and they call you again,” she said.

A second run of “Until the Flood” is planned for the fall; right now, Nicholson is moving to South Hadley and will be working at a performing arts middle/high school. She plans to take a short acting break, and is exploring going to grad school in the Pioneer Valley.

It just so happens that her new job is only a few minutes from her new apartment. “I think it was meant to be this way,” she said.