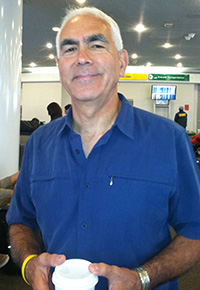 Ph.D., University of Illinois at
Urbana-Champaign, 1997

EDUC 430, Teaching in an Inclusive Classroom

EDUC 630, Teaching in an Inclusive Classroom

Dr. Fink came to MCLA in 2006 after a career spanning 35 years in childcare, early childhood education, out-of-school time care, and research and training related to children with disabilities and their families. Among his books are Making a Place for Kids with Disabilities (2000) Control the Climate, Not the Children: Discipline in School Age Care (1995), and a children’s book, Mr. Silver and Mrs. Gold (1980).

He spent a dozen years as a teacher and administrator in preschool and school-age childcare settings in the Boston area, followed by eight years at the Wellesley College Center for Research on Women as part of a national project conducting training and research related to “latchkey children.” He edited a nationally circulated newsletter during those years, and designed and conducted training for audiences that included school principals and superintendents, as well as front-line afterschool childcare staff. In 1990, Dr. Fink became the first-ever recipient of a World Institute on Disabilities grant to study the inclusion of children with disabilities in childcare.

As co-Director of a national federal initiative during the Clinton administration called Map to Inclusive Childcare, Fink worked on strategic planning with state leaders to improve access of children with disabilities to high-quality early childhood and childcare opportunities. Later, he joined the University of Connecticut’s Center for Developmental Disabilities as part of its research faculty.

Dale has been a keynote speaker at conferences in Nova Scotia and Alberta (Canada), Sydney, Australia and at statewide conferences in Arizona, Florida, Texas, New York, Vermont, Massachusetts, and many others.

Fink teaches courses in early childhood education, special education, and Children’s Literature. In addition to his faculty responsibilities, Fink has developed courses and workshops for community-based early childhood educators, presented at a statewide STEM Summit, edited a book by colleague Anthony Gengarelly from the Art Department, edited the 2013 issue of the MCLA journal The Mind’s Eye, and delivered the featured address for ALANA’s Martin Luther King celebration.