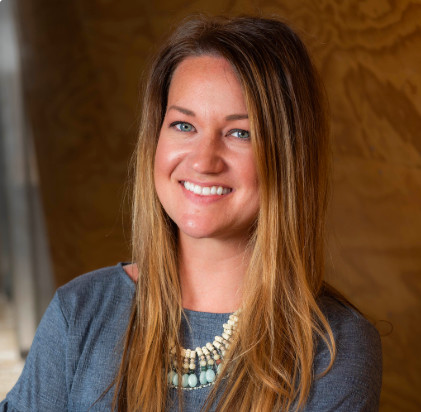 In 2012, Sally Shaughnessy '02 moved to Denver, Colo., to work as a producer and senior project manager for The Integer Group. She is now at Aten Design Group, where she leads the project management practice.

By networking with a fellow MCLA grad and Pi Upsilon Omega sister, Sally Shaughnessy ‘02 began her career in project management at Digitas in 2005, and has been in the field ever since. “I owe my entire career to networking through my sorority sister,” said Shaughnessy.

After graduation, the English major and PR/Broadcasting minor from Pembroke, Mass., worked as a string reporter and an on-air news anchor at 95.9 WATD FM in Marshfield, Mass. “I loved being on the radio and being in the community, interviewing people and engaging with them,” she said. “As a broadcaster, you’re informing the masses and telling stories. In advertising, you’re doing the same thing. I want to help makers tell their stories, whether it’s on a microphone or in a conference room.”

In 2012, Shaughnessy moved to Denver, Colo., to work as a producer and senior project manager for The Integer Group. She is now at Aten Design Group, where she leads the project management practice and is the only woman on the agency's leadership team.

Shaughnessy has often found herself the only woman in the room, and it pushed her to become a mentor to other young women. She mentors young Pi Upsilon Omega sisters, is a member of the Junior League of Denver, and sits on the board of Bella Boutique, a Denver nonprofit that provides free prom and homecoming gowns, shoes, accessories, hair, and makeup for teens on free or reduced lunch. Students get ready, from head to toe, with the help of a personal shopper. “The boutique replicates a mall shopping experience, so our students can have the same equitable, dignified experience their peers have,” Shaughnessy said.

Growing up the daughter of a police officer and a housewife, Shaughnessy said she could have been a Bella shopper when she was a teenager. “Just because parents struggle, children shouldn’t have to suffer,” she said. “With my communications degree, a marketing and advertising background, and my strong female voice, I knew I could help grow this organization.”

Shaughnessy said MCLA helped sow the seeds of her volunteerism and community activism. “From field days for North Adams children to cystic fibrosis runs and park cleanups, we did a lot of good through the sorority and the Inter-Greek Council that stuck with me,” she said.

She said being part of the sorority and president of the Inter-Greek Council prepared her to be a strong female leader, to not be afraid to be the only female voice in a room, and to speak her mind when she had something to say. “I learned how to advocated for myself,” she said. “MCLA prepared me to understand how to work hard and how to speak up and lead. That’s what I attribute to my now being a boss, a manager, and a mentor.”