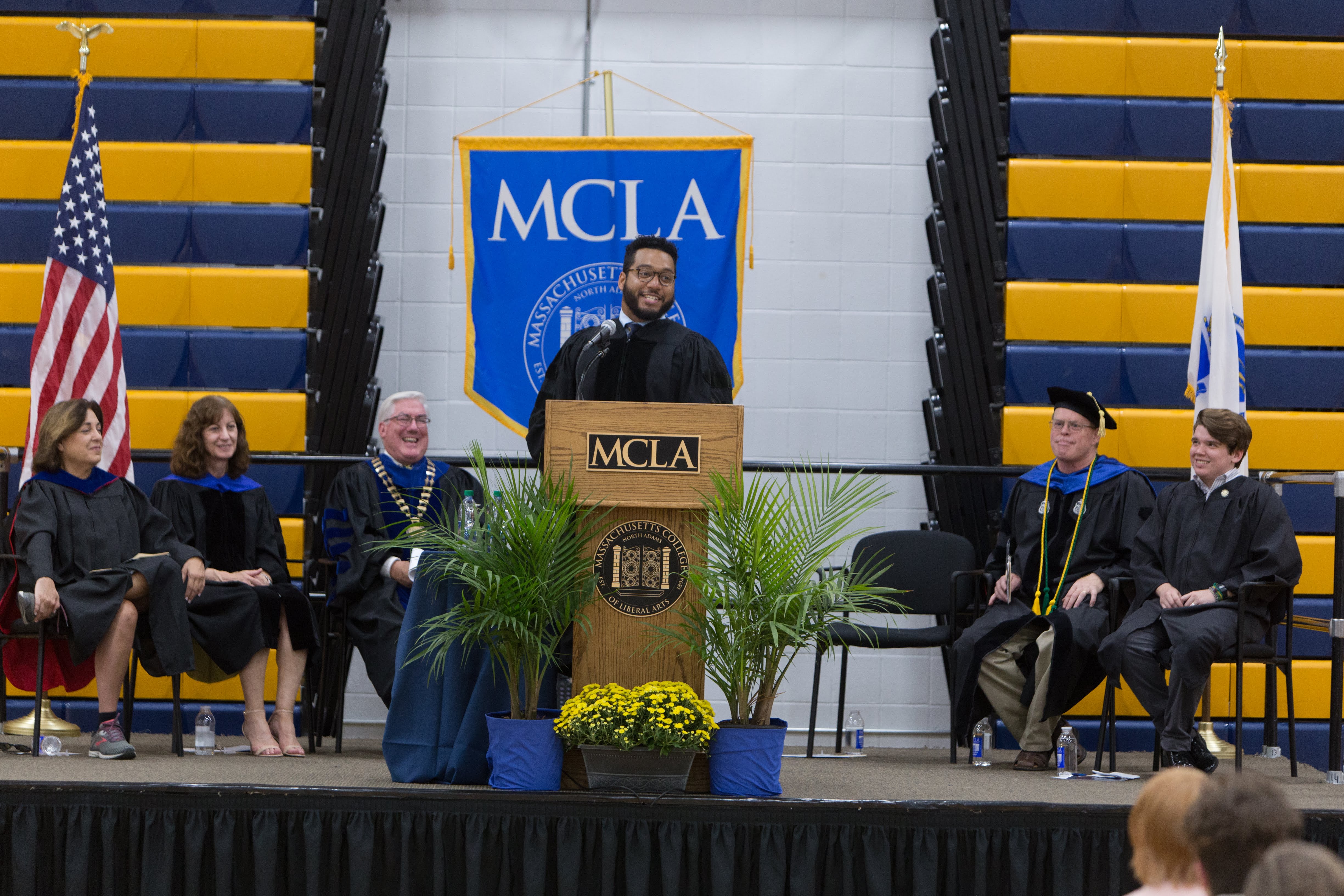 Note: This story was submitted as a nomination for the National Life Group Life Changer of the Year Award. Jamal Ahamad ’11 was nominated for the award by MCLA President James F. Birge. Leave a comment supporting Jamal’s nomination here.

Jamal Ahamad has learned he needs to meet his students where they are—but that he better have something useful to offer them when he gets there.

“I thought for a long time, ‘because I’m a young, Black male, this is going to be easy. The kids will see someone like them,’” he said. “I used to think it was just about being relatable. Well, if you’re only relatable, that’s kind of shallow in the classroom. You’re there to teach them a certain set of skills. I don’t want to just be the cool Black teacher. I want to be a good teacher, and that means putting in a lot of work.”

Ahamad, a teacher at Taconic High School in Pittsfield, Mass., mostly teaches English and African American literature, though these days he’s added other classes to his roster as a result of the pandemic and his district’s approach to virtual schooling. When Massachusetts public schools shut down for six weeks in early spring 2020, putting students, families, and teachers on hold while forming a response plan, Ahamad took it as an opportunity to pore over African American and YA literature, pondering curricular adjustments and choosing new works his students would appreciate, relate to, and learn from. He also thought deeply about the kind of leaders, artists, and current events he wanted to discuss in his classes, and what materials to use to spark lively conversations.

At Massachusetts College of Liberal Arts in North Adams, Mass., Ahamad minored in arts management, where he learned about curation. “We were taught that you can put anything in front of anyone as long as you prepare them for it, but you shouldn’t surprise them with it,” he said. He applies this lesson to his classes: “I have things mapped out from day 1 to the last day,” he said. “If I tell them what we’re covering, the skills we need, and how it’s going to benefit them, they know I have a goal and I’m not wasting their time.”

He said he loves teaching books like Nic Stone’s “Dear Martin” and its sequel “Dear Justyce,” which chronicle the stories of black teens in very different places in their lives; “Long Way Down” by Jason Reynolds, which tells the story of gun violence in free poetic verse; and “Not So Pure and Simple” by Lamar Giles, which covers sexuality, consent, and relationships.

“There’s no reason why our students should be reading the exact same things their parents read,” he said. “The world is changing very fast. This is the age we have to capture them to get them enticed with reading. If the reading is dry, we’re missing them.”

Ahamad has also brought this approach to the Pittsfield School District’s ongoing curriculum overhaul. He works on a committee with many other young teachers as well as long-term educators, looking at ways to refine and enhance curricula for students from Kindergarten through senior year.

As one of only five or so black teachers in all of Berkshire County, he knows his perspective is crucial in the district, and that the overhaul is an opportunity to introduce more diverse material and foster a love of reading—and learning—from an early age. “Let’s put some language in front of the students they can use, relate to, that allows them to feel seen and heard,” he said. This also means including non-white authors who don’t focus primarily on race.

“If we want them to know certain things, develop a work ethic, we have to start as young as possible. When I develop curriculum, I’m assisting our director for curriculum as far back as fifth and sixth grade, so that we can change the culture of our education system,” he said. “I want to create an environment where you feel welcomed, where you’re going to get something for you.  How can can we treat our students as individuals if we’re just going through the motions with a 20-year-old curriculum?” 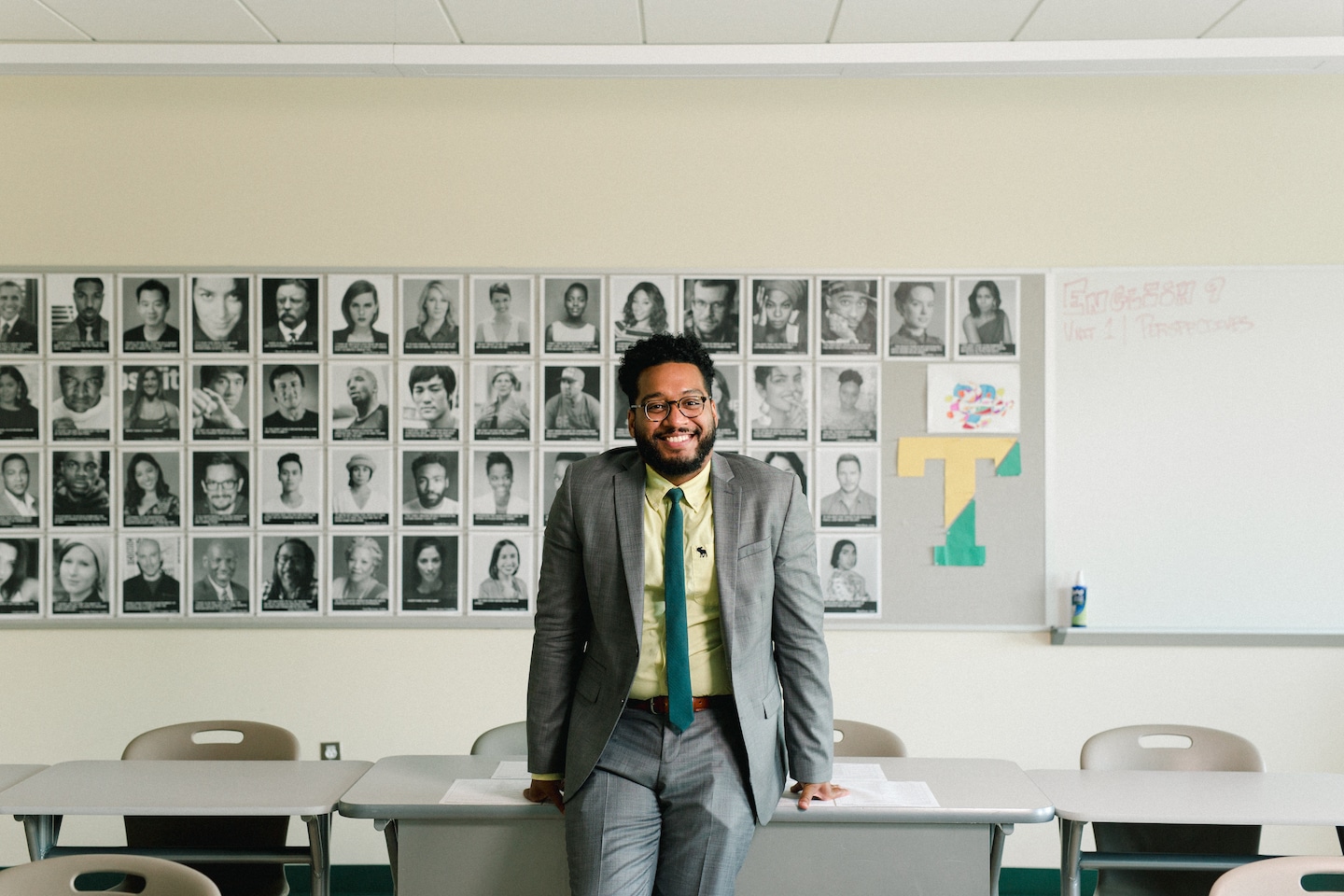 Ahamad has always known he wanted to be a teacher. Growing up in Brooklyn, N.Y., he attended Science Skills Center High School, and treasured the space it gave him to be himself. “I didn’t really fit in. I wasn’t into sports. I didn’t listen to hop hop. I was very much a goody two-shoes church boy, and the only place I felt comfortable was in school,” he said. “Ideally, I’d be a full-time student all the time. The best I can do is be a teacher.” (He is also attending graduate school at MCLA, working toward his master’s degree in education.)

Ahamad has also been a dance teacher since 2011, and contributed to his community extensively before teaching full-time, from volunteering with the Berkshire Compact for Education to working as a youth counselor for the BerkshireWorks Career Center. In 2016, he was named to the “Berkshire 40 Under 40” list, assembled annually by economic development nonprofit 1Berkshire, and in 2017, he received a Young Alumnus Award from the MCLA Alumni Association.

He currently teaches classes at Berkshire Dance Theatre, often working with his wife, Becky Ahamad, the theatre’s executive director. He said he’s learned a lot about dance, and about teaching, from watching his wife work with her students: “she puts them in positions to really own the material,” he said. “She gives them ownership by taking a seat and giving them the opportunity to show what they know.”

Most of his dance students are girls, and he takes this into account when choreographing. “I think about, ‘OK, this is fun for me to perform with my body, but I’m making a dance for my students. What can I do that will translate to their bodies instead that I can take to them for them to enjoy?”

It’s a similar approach to his classroom, where he makes sure students leave with something they can use—this student-forward approach has helped him connect with his classroom, hold deep conversations, and maintain a level of respect for his teenage pupils they may not always experience when out in the world. “Teaching can start with what I have to offer, but it should tailor to what they need and desire,” he said. “I need to give them something that’s going to speak to them right where they are.”