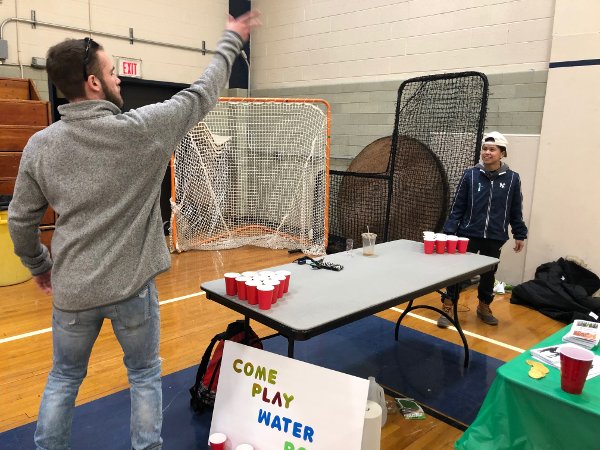 MCLA Assistant Professor of Biology Nicole Porther’s Health Promotion and Planning class recently got the opportunity to put their knowledge to work at the College’s annual Wellness Fair.

Every spring, the MCLA MountainOne Student Wellness Center coordinates a campus wide event that brings together health educators and health promotion information from MCLA staff as well as the surrounding community. This semester, Porther’s students joined those health professionals, offering information about binge drinking as well as some interactive opportunities to learn about its negative effects.

Students prepared pamphlets using Google Docs, collecting information on the dangers of binge drinking, and organized a water pong table incorporating stats about binge drinking in college. They also helped promote the Wellness Fair generally, creating posters to be placed on campus and through social media. Then, the day of the fair, they took turns staffing the table.

“Considering the short period of time we had to put things together, I think our booth was fairly successful,” said Kendal Haley ’19. “I almost think it was better that it was us and our classmates—they know what we’re doing because they see us out and about.”

Being able to get this kind of information from a peer can be easier than walking up to a health care professional—and it may also make them more likely to absorb that information, which was the goal. “I think students are more receptive to their peers, rather than a professor or an older adult,” said Dorianna Reardon ’19.

Offering options and useful information to people so they can make their own choices is what health education is about, Porther says—“so they do things responsibly, and make sure the environment is conducive for responsible behavior.”

“You have to communicate and get your message out there,” said Porther. “For example, public health officials don’t say ‘don’t have sex.’ They say ‘have sex responsibly.”

“The point was to educate about binge drinking,” said Haley. “It’s not about saying they shouldn’t do it. You know they’re going to do it—we want to educate them, so they can be safe about it. Whether they read the pamphlet is their own choice—we picked facts that were relatable to college students. We wanted to dig deeper and say, ‘you’re not invincible, and you need to deal with these problems now.”