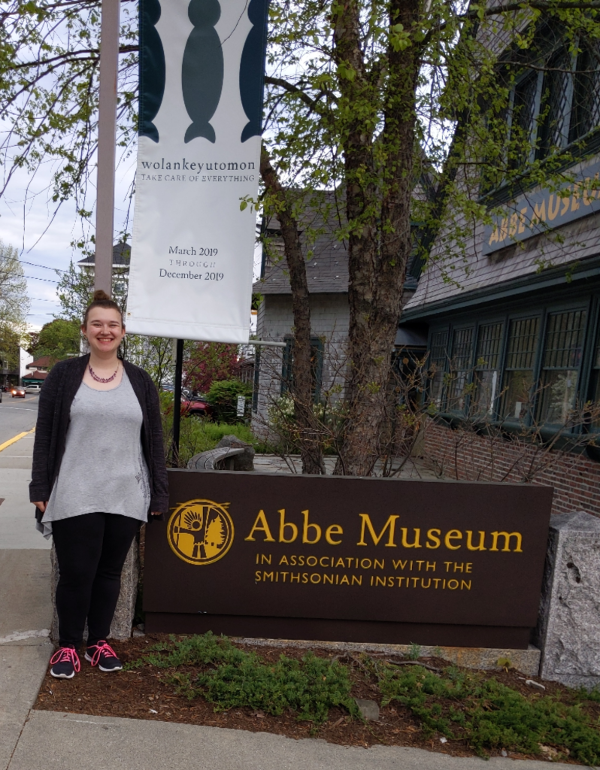 “One thing I love the most is being able to share a history most people don’t learn about with people from all over the world,” says Kaitlyn Vogel '19, who now works at the Abbe Museum in Bar Harbor, Maine.

The Abbe Museum in Bar Harbor, Maine, is dedicated to educating visitors about the Wabanaki Peoples, a Native American confederation of five nations that originated in the area we now call Maine. Alongside the rest of the museum staff, Kaitlyn Vogel ’19 is using her arts management degree to fulfill that mission.

“It’s a dream job,” said Vogel, who discovered a love of arts management and specifically museum work while at MCLA. A semester abroad in London that included a job at an animation studio and plenty of local opportunities to study the Berkshire tourism economy helped her contextualize her interest in this work and gave her opportunities to build her resume.

And so, Vogel now works at a mission-based nonprofit, meeting people from all over the world and sharing the story of the Wabanaki tribes—as well as how the museum’s own perspective has shifted since it was founded by Bar Harbor summer resident Dr. Robert Abbe, a New York doctor who collected Native American artifacts, in 1928.

In its first years, the museum presented the Wabanaki, incorrectly, as a vanished race. Now, older exhibits are used to bring context to the lens of history—who got to determine the story, who that story benefited, and who it excluded, for instance.  “We say, this is what happened. It’s unfortunate. But it did happen—and it happened everywhere,” Vogel said.

It’s subject matter that Vogel was already familiar with, thanks to a family connection to Bar Harbor (her mother grew up there) and to MCLA. In her last semester, she took Katherine Carroll’s art history course Designing America, which examined American art from 1800-1900. “That was a prime time for embedded racism. The course was great in learning how to steer people away from that sort of thinking and language, and to be able to teach them in a way where they will be receptive.”

The Abbe Museum has two locations—one in downtown Bar Harbor, and one in nearby Acadia National Park that is open only during the summer. Vogel works at both locations, welcoming visitors, explaining the museum’s mission and contents, and answering questions. Maine is called Vacationland, so Vogel meets a lot of international visitors who have never heard of the Wabanaki. “One thing I love the most is being able to share a history most people don’t learn about with people from all over the world,” she said. “People who aren’t from America, and even those that are, often don’t know a lot about Native American history—especially Native Americans in New England.”