How Does it Feel to be Accepted to a Top Ph.D. Program? 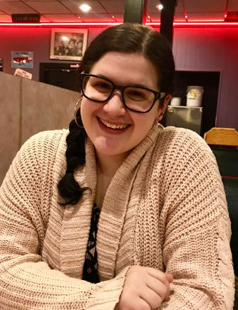 Bri Sarno ’19 was accepted to West Virginia University (WVU) to begin work on her Ph.D. in behavioral analysis.

A bonus: She’ll enter the program as a published scientist. A paper she co-authored with Psychology Professor Thomas Byrne is appearing in the December 2018 issue of the Journal of the Experimental Analysis of Behavior.

“I think having a publication under my belt helped me a lot,” Sarno says. Some of the research she’s done as an MCLA student is related to research currently being conducted at WVU; Sarno says she feels this helped her stand out as one of three applicants ultimately chosen for the program.

Sarno, a psychology major with a minor in applied behavior analysis from Ashland, Mass., was intimately involved with the design and completion of the project – a study focused on her investigation of different reinforcement schedules involving duration requirements and reinforcement delays.

Though she has wanted to earn a Ph.D. “since I knew what a Ph.D. was,” Sarno says the work she did with Byrne, and in the psychology department in general, confirmed for her that behavioral analysis was the way to go.

Behavior analysts study the factors that influence behavior and attempt to use that information to solve behavior problems, whether that be on an individual basis, such as working with children with autism and their and teachers, or on a larger scale, such as identifying better treatments for addiction. While other Ph.D. programs focus on either applied experimental behavioral analysis, WVU has flexibility that will allow Sarno to study in both fields. “I’m really interested in both, and I think it’s important to have a background in both,” she says.

Earlier in her college career, she told Byrne she wanted to start working on research. “He had a list of ideas and told me to pick one,” she says. “He’s been my total mentor in all of this. I wouldn’t have accomplished this without him. He’s so dedicated to giving students opportunities.”

Sarno is excited to begin her work at WVU (she’ll start by earning a master’s degree, then continue on to Ph.D. work)—but she’s also excited to teach. She says she can imagine herself working at a college like MCLA in the future, where teaching is a major focus. “I see myself at a small, intimate school, being able to connect with students, and mentoring people like Tom has done for me,” she says.