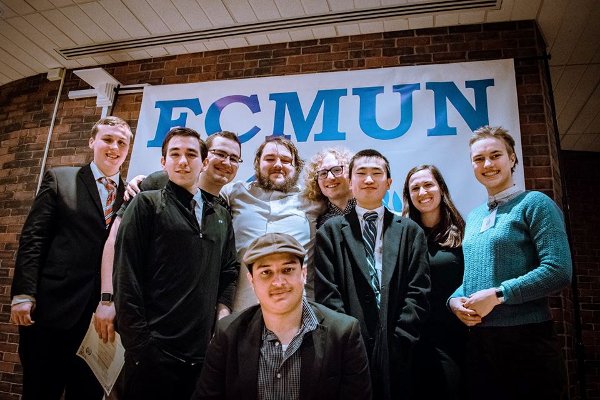 Do high-pressure scenarios get your adrenaline pumping? Do you often read political news and then ponder what you would do if you had been in the same situation? Are you interested in time travel—past, present, or both?

If so, you’re in luck—thanks to the hard work of MCLA students, there’s now a Model UN club on campus. A chapter of the larger Political Science Club, the new group means additional funding is earmarked for students to attend Model UN conferences and other related events.

Though MCLA offers a spring-semester Model UN course that culminates with students attending a conference in Canada, students—and professors in the History, Political Science, and Public Policy Department—felt there was enough interest to add a club along with additional conference opportunities.

Corey Powers ’19 of Bethany, Conn., is the MCLA Model UN chair. He had been involved in Model UN in high school and at his previous college; when he transferred here, “I knew a lot about how Model UN clubs operated, so I was able to help with that,” he said.

The club just attended its first conference in April, the Five Colleges Model United Nations Conference at Mount Holyoke in South Hadley, Mass. MCLA’s Debate Club joined in on the trip, where students got down to the serious business of how to colonize Mars.

Generally, conferences provide a scenario, then multiple roles inside that scenario, each with its own priorities and goals. Bellas and Powers worked on the same committee, with Bellas in the role of president of the United States. As president, Bellas helped break a U.S. astronaut out of Chinese prison, assassinated a tech industry scion, and was impeached for his role in bribing a Chinese prison warden. (He received an honorable mention award for his work.)

Besides the obvious—building public speaking, critical thinking, and research skills—Bellas says he likes Model UN because of the networking opportunities conferences provide. In addition to students majoring in a wide variety of academic disciplines, he’s met people from different countries, people with different backgrounds and different values—and has worked with all of them. “You build up a network of friends,” he said. “I still keep in contact with people I’ve been to conferences with. And you get to cover a lot of interesting stuff.”

As the Model UN club chapter builds its on-campus presence, Powers is looking ahead, to the real-life future. “As we grow the club, we hope to host a high school conference,” he said. “There aren’t many Model UN conferences in the area. If we can help host it and bring it to Berkshire County, that would be great.”