MCLAs Recording Studio Produces its First EP, with More on the Way 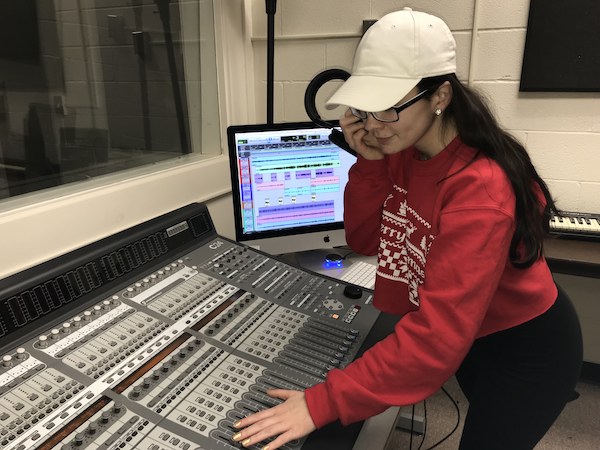 Last December, a group of 11 MCLA music students released a holiday EP featuring their take on seven classic Christmas songs. “A Very North Adams Christmas: The Holiday EP” was released as a physical CD during the MCLA Winter Concert on December 9, 2019 and a limited number were given out for free. All 125 were snatched up quickly.

The students recorded the album in MCLA’s own recording studio, where most of them have taken Home Studio Recording with Professor Jeff Link and private composition lessons with Professor Michael Dilthey. Many of the students had performed in school concerts before, but few of them had ever recorded music.

It was a debut project for the MCLA Music Program as well. While taking Professor Diane Scott’s fall 2019 artist entrepreneurship class, Demetri Williams ’20 and Jordan DeGaetano ’19 decided they wanted to collaborate on a project with their classmates before they graduated. Scott reminded them of the campus resources that would allow them to self-produce their own work. The pair enlisted their classmates — seniors Devin Gibbs, Garrett Derosia, Rudy Dormeus, and Rowan Lampert, junior Dylan Martin, sophomores Sam Berthel, Haley Rode, and Bryan Butler, and freshman Jacob Siegel Zeserson — to play and sing on the EP. Alex Berry ’20 was the audio engineer, Nick Colabella ’20 designed the artwork, and Kenny Olchowski ’20 photographed the group.

DeGaetano produced the EP, as well as sang and played guitar on the album. She said she and Williams came up with the idea for the CD and planned it out in one day.

“Demitri and I thought about the singers and instrumentalists we knew and the best way to showcase those talents,” said DeGaetano. Two days later, the band got together and things progressed quickly. “We came up with the idea on October 25 and put it all together in about a month,” she said.

The students completed their EP with help from a $566 grant from MCLA, which was used to pay the photographer and graphic designer, and to purchase the physical CDs and their cases.

DeGaetano said the dedication of the students involved was what made the project possible, especially with such a short amount of time available to complete it. The end product, she said, received a lot of support from the MCLA community. Staff members, professors, and other students all inquired about how they could get their hands on a copy.

The students who worked on the EP are now connected in a way that only the arts can facilitate, said DeGaetano. “It’s the coolest thing I’ve ever done and I hope everyone else feels that way, too.”

She said she’s already heard from students who have been inspired to record their own projects in the College’s studio. “I think we’ve already started a trend,” she said. DeGaetano herself is currently producing and co-writing pieces for current MCLA music students, as well as composing her debut album — all to be recorded in the MCLA studio.

Senior Garrett Derosia is using the studio to mix his version of Daniel Caesar’s song “Best Part” and will follow that up with his take on “Valerie,” inspired by the Amy Winehouse version.

Expect to see a lot more coming out of this studio in the near future.