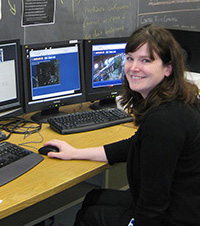 My research field is experimental particle physics. The universe is made of 12 fundamental particles: electron, electron neutrino, muon, muon neutrino, tau, tau neutrino, up quark, down quark, charm quark, strange quark, top (or truth) quark, and bottom (or beauty) quark. Of these 12 particles, I am most interested in the neutrinos, which come in three types: electron neutrino, muon neutrino, and tau neutrino. These guys are the most abundant particles in the universe, but we know the least about them. In fact, for a long time we thought they were massless, but now we know better.

Neutrinos are difficult to study because they are virtually massless, they are neutral, and they only interact through the weak interaction. This means neutrinos almost never interact. In fact, if we took a bunch of neutrinos produced inside the sun and we sent them through a light-year of lead, only about HALF of them would interact. The other half would travel right through a light-year of lead as if it were nothing! By the way, you have about 65 billion neutrinos traveling through your fingertip each second. 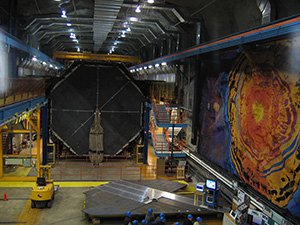 The only way we can "see" an elementary particle is through its electromagnetic interaction. Of course, the neutrino is neutral, so it doesn't interact through the electromagnetic force. We can only "see" neutrinos when they interact with other particles. But, from above, we know they don't interact very often. To see a neutrino interact, we must send MANY, MANY neutrinos through a very MASSIVE target. Then, occasionally, the neutrino will interact, and we will see the particles that are produced in the interaction. We use those particles to study the interaction of the neutrino and the neutrino itself. A good analogy: if you are walking through a snowy forest, and you see tracks, you can tell which animal was there. You don't see the animal, but you see its interaction with the snow. I began working with the elusive neutrino in graduate school. I worked on an experiment called DONuT (Direct Observation for Nu Tau). You can find some information about DONuT here. The goal of the DONuT experiment was the FIRST observation of the tau neutrino. The electron and muon neutrinos were observed decades earlier, but the tau-neutrino was difficult to observe. When a tau neutrino interacts (through the charged-current interaction), it produces a tau particle. If we see a tau particle (along with no other leptons), then we have seen a tau neutrino interact. The problem is the tau - it is a heavy, short-lived particle. The taus in DONuT only traveled ~ 5mm before decaying. We had to use a detector made of photographic film to capture a picture of the tau lepton. But we did, and we saw 9 tau neutrinos!!! You can read our last paper here:

By the way, all of these experiment are done at Fermilab, which is an amazing particle physics laboratory. 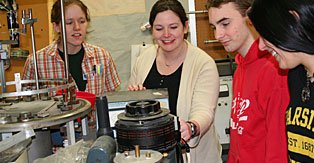 Current, I am working on the MINERvA experiment. Again, we are studying neutrinos. This time, we are trying to measure the probability that neutrinos interact, and, when they do interact, which types of particles do they create and how often do they create that set of particles. You can read more about MINERvA here. In addition to studying neutrinos, we are actually using neutrinos to study what happens inside the nucleus. It turns out there is all kind of crazy stuff happening inside of the nucleus that we don't understand. For example, the first MINERvA results suggest that neutrons and protons like to hang out in pairs inside the nucleus - who knew they were so social? Here is an article that ran in the CERN courier about this result:

MINERvA searches for wisdom among neutrinos

Below you will find my list of publications, where you can read much more about all of these experiments. 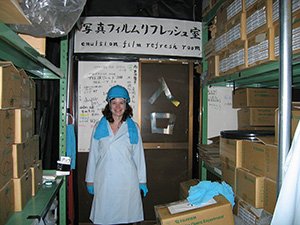 Careers in Education Panel Member at the Conference for Undergraduate Women in Physics (CUWiP), University of Massachusetts, Amherst, 2019

"Recent Results from the MINERvA Experiment", presented at the Lake Louise Winter Institute 2015 at Chateau Lake Louise in Alberta, Canada, 2015

"Neutrinos and the MINERvA Experiment", presented at the Physics and Astronomy Colloquium Series at Union College, Schenectady, NY, 2014

"Neutrinos and the MINERvA Experiment", presented at the Physics Colloquium at Bates College, Lewiston, ME, 2011