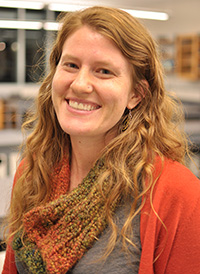 CCST 230: Energy and the Environment

My research examines how light interacts with matter, particularly the organic molecular crystal rubrene. The absorption of light by this crystal creates a photoexcitation that can move throughout the crystal. The movement of energy in organic molecular crystals is significant because it allows these crystals to be developed for use in organic electronic and optoelectronic devices, such as solar panels and flexible displays.

I study how the energy absorbed by the molecules of the rubrene crystal creates an excitation that can then share its energy with neighboring molecules. The initial molecule is excited to a singlet state, with an energy that is almost exactly half that of the lower energy triplet state. This energy ratio let's the initially excited singlet partition half of its energy to a neighboring molecule in the ground state, resulting in two excited state triplets. Two triplets can then pool their energy on one molecule, sending one of the molecules back to the higher energy singlet state. In this fashion, energy can be moved around in the crystal.

Using a degenerate four wave mixing set-up with 1 picosecond laser pulses, I can monitor how quickly the energy in the singlet state molecule can start being shared with the neighboring ground state molecules to create triplets. By using longer laser pulses, about 20 picoseconds, I can then monitor the lifetime of those triplet states.

One of the most unique aspects of this research is that I am in fact monitoring the triplet states. Singlet states are easier to observe they emit light when they relax back down to the ground state. Triplets are often referred to as a dark state because they do not emit light when they relax. With the four wave mixing set-up, we can detect the presence of triplets by how they change the material properties of the crystal - either by modifying the index of refraction or absorption coefficient. This eliminates the need to detect radiated light from the relaxing singlets, and allows for a much more flexible experimental set-up.

Looking forward, I greatly anticipate continuing these four-wave mixing experiments here at MCLA. The physics department is in the process of establishing a working optics lab. I'll be working closely with and training physics student, developing their experimental and research skill sets. I believe the hands-on approach to physics is how our students will best learn the material, while simultaneously preparing themselves for a career in science.

The Manga Guide to the Universe. San Francisco: No Starch Press, 2011. Print. (as Technical Reviewer) Ishikawa, Kenji and Kiyoshi Kawabata.

Exciton Dynamics in the Rubrene Single Crystal, Frontiers in Optics, 2013

REUs and Internships Panel Member at the Conference for Undergraduate Women in Physics (CUWiP), University of Massachusetts, Amherst, 2019