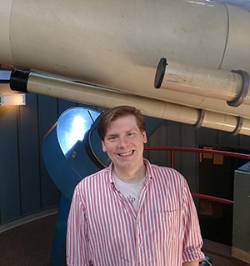 My research focuses on characterizing the Milky Way’s halo, the large, diffuse collection of stars, globular clusters, dwarf galaxies, and dark matter that surrounds its disk and bulge. I search for, separate, and characterize the orbits of tidal streams: long, narrow streams of stars that have been pulled out of a dwarf galaxy or globular cluster and into an orbit around the Milky Way. Searching for streams involves long, deep dives into large data sets. I use data from several wide-area surveys—most notably the Sloan Digital Sky Survey (SDSS) and the Gaia Survey—to trace stellar motions and look for groups of stars moving together.

In particular, my research has focused on using blue horizontal branch (BHB) stars in SDSS and Gaia to trace substructure. This type of star is particularly useful due to its narrow distribution in absolute magnitude and its intrinsic brightness. BHB stars can be seen over large distances (up to 100 kpc) and their distances can be determined with high accuracy without the need for parallax studies.

Currently, I'm developing and testing a new algorithm that searches for tidal streams based on the characteristic track their orbits make when plotted in line-of-sight velocity vs. heliocentric distance. I'm also attempting to characterize some unusual substructure in the first quadrant of the North Galactic Cap in the vicinity of the Virgo Overdensity.

Studying the structure and evolution of tidal streams is an important part of understanding the accretion history of the Milky Way and of refining current models of galaxy formation. It also provides us with a valuable tool to probe the gravitational potential of the Milky Way and its dark matter distribution. With more information about the shape and parameters of the Milky Way’s gravitational potential, we can place constraints on the morphology of the Galaxy’s dark matter halo, which in turn leads to constraints on which model of dark matter best fits observations.