Denise Marshall 81: Serving the College and the Community 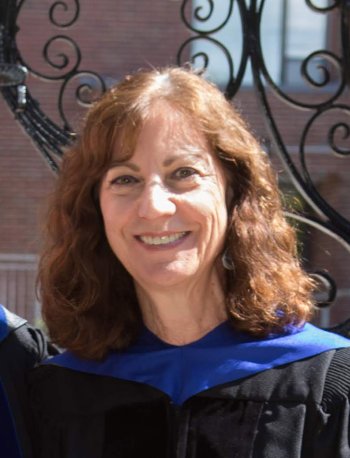 When Denise Marshall ’81 was a junior majoring in business administration at MCLA, she was offered an internship at City Savings Bank in Pittsfield. Unsure of what she wanted to do for her career, she jumped at the opportunity.

“At the end of that internship, the bank offered me a full-time position,” she said. Things clicked from there. She went on to spend 40 years in banking—recently retiring as executive vice president of Adams Community Bank.

Growing up in Pittsfield “with six siblings, there wasn’t a lot of extra to send people to college,” she said. She attended MCLA as a commuter student—the first in her family to attend college—concentrating in accounting because she liked math and was good at it. After entering the banking industry, she earned a graduate degree from the Massachusetts School for Financial Studies at Babson University in Wellesley, Mass.

As Marshall’s career grew, so did her community work, as workplace mentors connected her to different organizations. She’s chaired the boards of the Berkshire United Way and Gladys Allen Brigham Community Center, where she continues to serve as an advisory board member. She has also served on the boards of Berkshire County's chapter of the American Red Cross and Elder Services of Berkshire County. She also chairs MCLA’s Board of Trustees, which she joined in 2012.

“It’s always been the culture. From the very beginning, that’s how I got involved,” she said. “I’ve worked at three or four different community banks, and that was the culture at every one.”

As an MCLA trustee, Marshall has been able to see how wide the College’s impact is. “I was honored and thrilled to be a part of the leadership of the organization,” she said. “It provided me with a much better awareness and respect for where I had come from, and how important this college is not only to this community, but to the students who attend.”

Marshall has been able to meet and talk with students and faculty, from the Men of Color Initiative to the students working to alleviate food insecurity for their peers on campus. “Everywhere I look, I’m amazed by what is going on there, and the quality of the students that we have,” she says.

She also gets to meet with alumni, including many whose stories are similar to her own. “Sometimes you don’t realize how many people are actually affiliated with MCLA,” she says. “As I advanced in my career, I became more and more aware of how many successful people got their start at MCLA—and I continue to meet and hear about successful alums.”