Messoud Kerris 18: Building His Own Empire 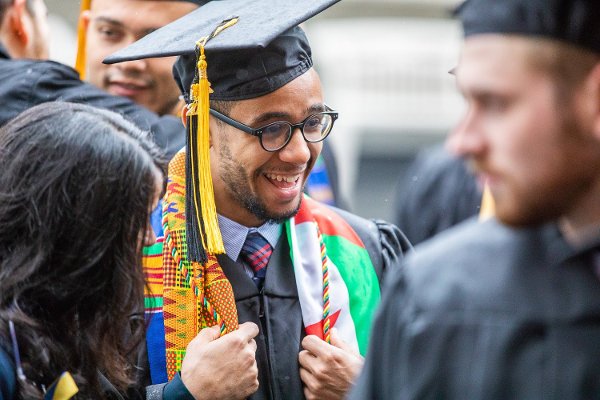 As an undergraduate, Messaoud Kerris '18 started a fund to help students who attend his alma mater, Brookline High School in Brookline, Mass., on the road to their own college careers.

An alumnus of the College’s Department of Business Administration recently saved enough for a down payment on his first home. Although that’s a great achievement for any young person, what makes it remarkable is the fact he did so while also funding a college scholarship to benefit a student from his high school. What makes these achievements truly extraordinary is that Messaoud Kerris ’18 accomplished both goals while he still was a student at MCLA.

“It’s easy,” he says. “Most people think it is the hardest thing to do, but it is as simple as a change of mindset. Two years ago, I changed my mind for the better. I began saving money each summer, and started to leverage all my financial opportunities.”

As an undergraduate, Kerris started a fund called the Messaoud Kerris Scholarship to help students who attend his alma mater, Brookline High School in Brookline, Mass., on the road to their own college careers. Created through a school program called “Steps to Success,” Kerris’s scholarship allowed him to provide the student who received the award last year with a tablet, a laptop, and a backpack, as well as all of the school supplies she would need for her first year of college.

Next year, he aims to sponsor two students. “It is important to give back, whether it is school supplies, money, or your time,” Kerris says.

At MCLA, he stayed motivated by listing his goals on his cell phone, where he viewed them often. He also created an Instagram account, @Money_mindset_17, which encourages young people to plan for their success and take control of their finances early on.

“I want everyone to reach their full potential, and to help people understand that there is more to life than just working a job,” Kerris said. “If you want to have the freedom to do whatever you want, then you have to empower yourself when it comes to financial literacy.”

Although he headed to Boston, Mass., to work as a solar consultant for Dvinci Energy soon after his May graduation, Kerris has set his sights on becoming his own boss through an entrepreneurial career.

“I want to own a real estate empire, as well as own social media platform, and possibly an agency,” Kerris explains. On his way to this goal, he is at Dvinci to hone his sales skills and perfect the way he interacts one-on-one.

“When college is over, there won’t be classes you can go to everyday to learn,” he says. “Pick up a book and read!” Most of the books he reads advise their readers to give back to the community, “And so, I did,” he says. “I can afford this because there is a purpose behind it. That pushes me.”