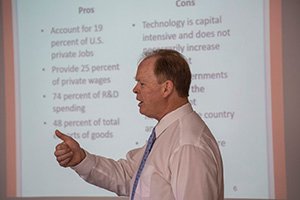 Dr. Tom Whalen in an Associate Professor of Business in the Business and Economics Department. Higher education is Tom’s third career. He previously served in the US Navy as an aviator and in the laptop computer industry in a variety of roles. He received his Ph.D. in Leadership Studies from Gonzaga University in Spokane, Washington. Tom has served at MCLA since 2014.  He previously served at McPherson College (Kansas).  He teaches management, marketing, and leadership courses. His research interests include leadership, culture, social ontology, and social theory. Tom and his wife Cheryl live in Adams with their rescue dog Bridget.

Whalen, T. B. (Forthcoming). The Leadership Hierarchy: One Approach to Teaching The Servant as Leader

Whalen, T. B. (2017) A Philosophical View of Human Perception The Mind’s Eye.

Whalen, T. B. (2013). A theory of social ontology: Explaining the emergence of society, culture, and economy. International Journal of Interdisciplinary Cultural Studies, 7(1), 21-34.