A Journalist Returns to Cover Her Community 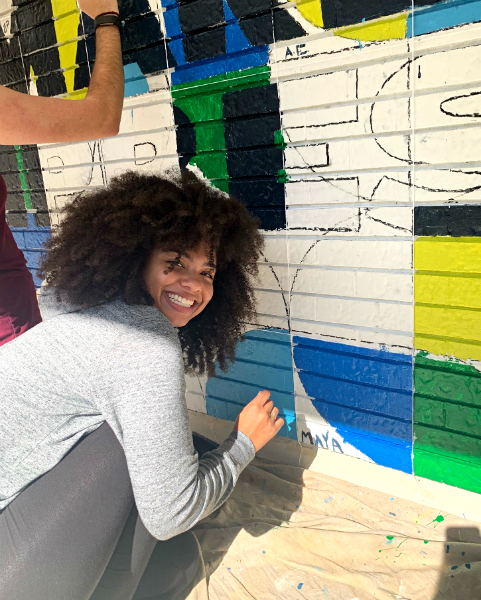 Maya McFadden ’19 signs the community mural at the 2019 President's Ice Cream social at MCLA. Days after graduating in December, McFadden was hired by her hometown newspaper, the New Haven Independent.

Maya McFadden ’19 was hired by her hometown newspaper, the New Haven Independent, only days after graduating from MCLA this past December. The Independent’s editor was already familiar with her work. McFadden was the recipient of a 2019 Ellen J. Bernstein Journalism Internship award, which allowed her to write for the paper during her summer break.

“Not everyone is able to have a full-time position right after they graduate,” said McFadden. “The internship got my foot in the door, a huge step that MCLA was able to provide for me.”

McFadden transferred from her local community college, as a junior, in 2017. “I’d looked in depth at schools before I applied, and did an overnight at MCLA as a senior in high school, so I knew it had what I wanted,” she said.

“MCLA made it simple to apply for internships,” McFadden said, “and the scholarship offered $4,000 for each student who secured one. I knew I wanted to be back home during the summer, so I reached out to newspapers in Connecticut.” She said Shawn McIntosh, assistant professor of digital journalism and communications, helped her come up with seven different news outlets to apply to and helped her personalize each cover letter.

McFadden said she’s covering the same content for the Independent as before, but is now penning four or five stories a week as opposed to the two she was responsible for as an intern. She said the internship gave her a real sense of how to cover her city.

At MCLA, McFadden worked at The Beacon as a staff writer, a senior news editor, and a features editor, but also made a huge impression on students, professors, and staff outside of the English department. She worked as a resident advisor (RA), a College admissions ambassador, and an office assistant for the Multicultural Center. She was a member of the Black Student Union, the Cape Verdean Student Alliance, and the African Student Association, and was co-president of the Women of Color Initiative, which she helped found in the fall of 2018.

Last year, McFadden was nominated for and received the Multicultural Advancement Award, and this year received the Vice President’s Award for Distinguished Leadership, Scholarship, and Service, one of the College’s most prestigious awards.

She says she wouldn’t have held these leadership positions without the encouragement of her professors. “After one semester, Shawn encouraged me to be an editor at The Beacon. My first RA recommended me to be an RA. It seems coincidental but it’s how MCLA is structured, to push people. A lot of professors and staff helped get me out of my shell. Without that, I probably wouldn’t be working as a reporter and having the success I am. I’m glad I had those people to see that potential in me.”

McFadden said her goal was always to pursue a journalism career that revolved around social justice, which is the reason she added an American Ethnic Studies minor to her Journalism concentration. “Social justice was very much my niche while at MCLA and I aimed to revolve the majority of my work around it,” she said, “whether it was stories I wrote for The Beacon or events I hosted on campus as an RA and with the Women of Color Initiative. This is primarily why I received both the Multicultural Advancement Award and the Vice President’s Award. My passions to write, lead, and be an activist are social justice driven. I hope to continue to focus much of my work on reporting on communities of color and criminal justice reform.”