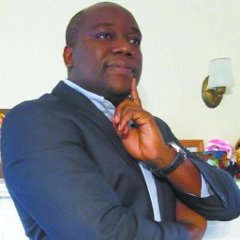 Dr. Paul Nnodim’s Spring 2020 Kant Seminar and Social & Political Philosophy students were among the first to read the manuscript of his new book, Beyond Justice as Fairness: Rethinking Rawls from a Cross-Cultural Perspective.

“They gave me interesting feedback,” Nnodim said. In one class, the philosophy professor shared a fictionalized anecdote from the book’s first chapter. It’s about a liberal arts college student somewhere in New England who studied abroad in Europe and had a racist encounter with an American Studies professor. In the end, the potentially ugly story had a happy ending. The story’s incidents became a transformative, learning experience for the narrow-minded professor, leading to his renunciation of long-held prejudice against people of color. This narrative is based on something that happened to Nnodim when he, himself, was a student in Germany (he earned his Ph.D. from Johannes Gutenberg University in Mainz).

“The students screamed, wow, did this actually happen to a someone, or is it just a work of fiction?” he said. The book’s first chapter is about prejudice, injustice, and ignorance and “investigates what causes people to act unjustly towards others,” said Nnodim. “The students were eager to know what happened next, and that led me to believe, ‘ok, I got this right.’”

Beyond Justice as Fairness, which will be published on November 15 (the e-book is out now) by Rowman and Littlefield Group has already been praised by reviewers. It’s called “a brilliant achievement on several levels” by Dr. Nir Eisikovits of the University of Massachusetts, Boston, and “a tour de force” by Williams College Professor Brahim El Guabli.

This is Nnodim’s third academic book, and the second centering on the works of the contemporary American philosopher John Rawls (1921-2002). Rawls’s notable works, A Theory of Justice (1971), Political Liberalism (1993), and The Law of Peoples (1999), rekindled and galvanized the discourse on justice in contemporary political philosophy. Today, his ideas continue to inspire debates across the disciplines, with notable impacts in academic fields such as economics, law, sociology, and politics. Nnodim’s work extends Rawls’ ideas to non-Western societies.

“Although Rawls’s account of global justice might suffer some setbacks at the moment or may not resonate with everyone’s moral considerations, it is nevertheless a starting point in this all-important discourse,” Nnodim said. “The debate must begin somewhere and somehow, and Rawls has given us the prolegomena to future discourses on justice. We now must connect the dots, fill in the blanks, and close the gaps by taking that debate to the next level while having as our framework the legal, economic, cultural, and religious complexities of our world.”

Nnodim uses cross-cultural ideas to show that a binary conception of the world as “Western” and “non-Western” is false, and that viewing group-oriented societies and cultures as lacking individualism is inaccurate:

“Apriori conceptualization of persons in other cultures as different, Western versus non-Western binary views, comes with some extra philosophical baggage. In every society in the world, you will see people who are first of all individuals, but yet communalistic in certain senses,” Nnodim said. “The idea that non-Western people engage in groupthink only, rather than having a sense of individualism—I think that idea is false.”

This will be Nnodim’s first new book since 2012, when he co-authored Corporate Social Responsibility (Routledge). “It feels good,” he said. “Writing a book with someone else is a little easier, but a project of this magnitude takes a while to accomplish.”

Nnodim will share the completed work with his students in the spring; he’ll teach a seminar on Rawls, with the book as supplemental reading. His students are also mentioned in the book’s acknowledgments.

“If someday, by either conscientious effort or sheer luck, we find ourselves beyond the frontiers of justice as fairness, we may conceptualize justice as fairness engendered by empathy, compassion, and love for our fellow humans and some other living beings.”

Learn more about Beyond Justice as Fairness at https://rowman.com/ISBN/9781498558075/Beyond-Justice-as-Fairness-Rethinking-Rawls-from-a-Cross-Cultural-Perspective.