A community effort to fight COVID-19 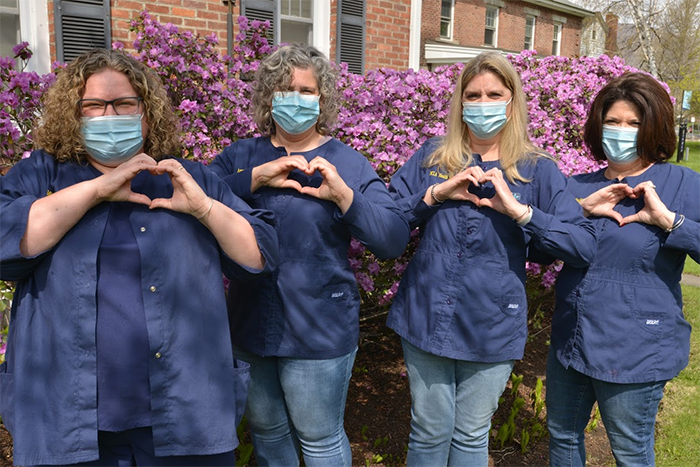 It’s been quite a year for MCLA’s Health Services team.

Since the COVID-19 pandemic arrived in the Berkshires and changed everything about the way we work, live, and interact, the staff at MCLA’s MountainOne Wellness Center have been working around the clock—first to help plan the College’s pandemic response activities, then to coordinate testing and contact tracing while also seeing students for various other health-related issues as usual.

This team of three full-time staff, with Rodriguez on campus two days a week, “rolled with it, and did whatever it took to get it done,” said Krzanik. That included coordinating volunteers for MCLA’s test site alongside Vice President of Student Affairs Cathy Holbrook and Vice President of Strategic Initiatives Gina Puc. Around 30 College staff members checked people in, performed tests via nose swab, and more.

The Health Services team also kept in touch regularly with the College’s leadership team, the Massachusetts Department of Public Health, and health care workers in local emergency rooms, both reporting information from campus and getting information about community spread.

On campus, “it reached a point where we were testing anyone who wanted to be tested,” regardless of whether they were presenting symptoms, Krzanik said. “The ability to be able to do that was huge.”

While MCLA did see a handful of COVID-19 cases among the community during the fall, there was no spread from these cases on campus, and the College’s positivity rate was 10 times lower than the Commonwealth of Massachusetts. Even during the spring semester, when the College made the decision to pivot to remote learning in April after an uptick in cases, the level of spread was lower on campus than in the wider Berkshire community.

“As sad as it is, we’re proud we made it as far as we did,” said Krzanik. “I think the whole medical community, nationally, globally…I don’t think anyone thought this would be anything they would ever have to deal with.”

After the students left residence areas in April, the Health Services staff finished work at its test site, kept tabs on any students finishing out quarantine periods in the Flagg Townhouse area set aside for students who tested positive, then shifted testing to an appointment-based model, directing anyone displaying symptoms of the virus to Berkshire Health Systems’ Stop the Spread testing site down the street from campus.

The Health Services staffers say they’ve gotten plenty of appreciation from the MCLA community, from flower deliveries to handwritten notes, grateful emails, and thank-yous from students.

“The collaboration with the other campus offices and departments has been huge,” said Bullett-Smith. “One day, two coaches spent hours helping us contact trace; we had 40-50 people to contact. It was close to the end of the day and we had been doing it since 8 a.m. We didn’t even ask—someone made a comment, and boom, we had assistance.”

What’s the most important takeaway from this year, according to Krzanik? “How, as a community, people were willing to lend a hand. We would get emails or phone calls from people wanting to know if they could help, or how they could help,” she said. “Us keeping the positivity rate low was really a job that required multiple departments and multiple individuals to work alongside us to make that happen.”