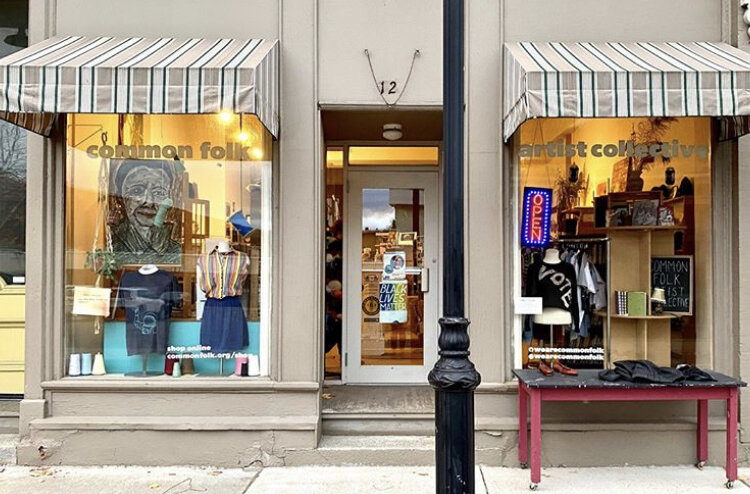 The Common Folk Artist Collective will soon have a permanent home in downtown North Adams—thanks to years of hard work from local artists, many of whom are MCLA alumni.

Common Folk Co-Directors Jessica Sweeney ‘11 and Rebecca Waterhouse ‘17 launched a campaign in late 2021, working within the guidelines of the Massachusetts Growth Capital Corporation’s (MGCC) Biz-M-Power matching grant. With more than $25,000 raised from community members, MGCC will match up to $20,000, giving the organization around $50,000 to work with. Another $4,000 was committed from local businesses after Common Folk met its “stretch goal” of $26,000.

A permanent space on Main Street means Common Folk can continue to host programming, curate exhibitions, and sell work created by the collective’s members, who offer artistic lessons on skills like screen printing, edit and publish a literary journal (led by Shannon Cahill ’18), and host webinars on books, creativity, and the art of conversation, among other topics.

The money raised pays about half the mortgage on Common Folk’s space at 12 Holden Street, which houses the storefront as well as studio space.

"I am overwhelmed by the incredible amount of support we've received through this campaign,” said Waterhouse. “We reached our initial goal faster than any of us expected and were able to continue that momentum up to our stretch goal - an outcome that has only reaffirmed the deep trust and connection we've built in our community."

This fundraiser is the start of a multi-phase campaign for Common Folk—the next step, according to Sweeney, is expanding the studio space. “We want to expand our studio space to better accommodate our artists, which would also allow us to expand retail beyond just our members. Our hope is to grow more retail space for artists and creators in the community who may not need studio space as well,” she said.

“During my time at MCLA I learned that North Adams is a deeply collaborative community,” she said. “There is such a willingness for people to rally around your success and help you build what you want to build here. I never felt that in other places I lived.”

Other alumni who have been involved in Common Folk from the start include Makayla McGeeney ‘16, who works as the organization’s marketing coordinator, as well as Samantha White '19, Sarah DeFusco '18, Andrew Casteel '18, Ryan Walters '16, Dan O'Connell '16, and Avery Finnivan '15.

“After leaving college, there's a window of feeling in limbo about having friends and a community, but I quickly found Common Folk and was introduced to a whole new community and creative family,” said McGeeney. “I think before this point it was hard to understand what the future of Common Folk would become, but now it's clear that there's a solid foundation, not only of community members and business owners but creatives as well, who are behind the organization 100%."