MCLA's Affirmation Closet Leads to Student Self Discovery and Empowerment 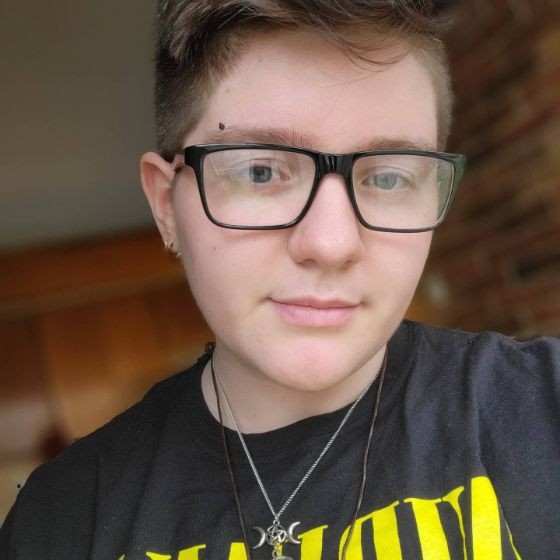 Students at MCLA now have access to gender-affirming clothing, as needed, for free, thanks to an effort led by Jack Vezeris ’23.

This spring, Vezeris worked with Student Affairs to open the MCLA Affirmation Closet in the Amsler Campus Center. Run on donations and volunteer work, the Affirmation Closet offers free clothing in extended sizes for MCLA students who are looking for gender-affirming outfits and accessories.

“For a lot of people, college is a really important part of self-discovery,” Vezeris said. “It can be a home away from home, a place where you get to be who you want to be.”

College students are often short on resources—in fact, about half of MCLA’s students are federal Pell Grant recipients, which means they come from families earning less than $50,000 per year. To a student who doesn’t have a lot of extra spending money, the Affirmation Closet is a place to experiment without worrying about their bank account balance.

“MCLA has a solid queer community, but we don’t have the resources to enable people to dress themselves how they see themselves,” Vezeris said. “Buying new clothes isn’t an option for everybody.”

Vezeris, also president of MCLA’s Queer Student Union, had heard Vice President of Student Affairs Jeannette Smith mention a similar closet project during her campus interview process. Once she officially joined the MCLA community, he reached out to her office to make it happen here.

The MCLA community responded generously, and the Affirmation Closet is now stocked with clothing in extra small to 4XL, plus things like shoes, accessories, and unopened makeup. “I’ve had people approach me that they’re excited they can find clothes that fit them,” said Vezeris. “We’ve had some adorable dresses come in in plus sizes. It makes me so happy for the people that take them.”

QSU recently co-sponsored a drag dance with MCLA’s Black Student Union, and Vezeris was thrilled to see people wearing things they got from the Affirmation Closet. “It was like a puzzle coming together in my brain,” he said.

Vezeris said that next year, he wants to work on growing QSU as a club, as well as add a request form to the Affirmation Closet’s offerings so students who need things like wigs, a chest binder, etc., to be able to access them. “I want it to not only be a safe space—we’re trying to get everyone and anyone to our meetings,” he said. “We do educational events and bonding events every week, and I want people who are allies to feel welcome in that space.”

A psychology and music major who grew up on Long Island, Vezeris said he’s mulling over what he wants to do after graduation, but he knows this kind of advocacy is going to fuel him for many years to come. “This work is something that I need to do to help out my community where I can,” he said. “I’m a very outspoken person, I’m very extroverted—I have no problem being the loud voice for others when it’s doing a service for other queer people.”