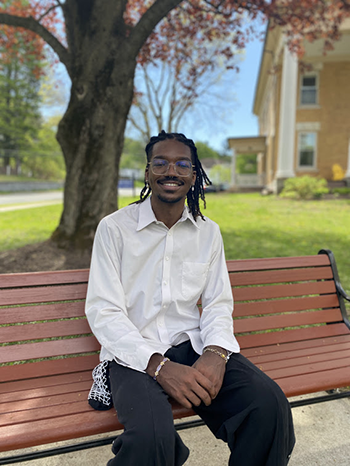 Odiase Williamson ’22 has been chosen as MCLA’s “29 Who Shine” Award recipient, given annually by the Massachusetts Department of Education to outstanding students from colleges across the Commonwealth. An artist and arts management major, Williamson has made the most of his time at MCLA both on and off campus.

In addition to being an excellent student, Williamson has completed several internships and special assignments in arts, arts management, and community engagement, including:

Williamson is also a community-builder in addition to his accomplishments in the arts and arts management world. Working with MCLA’s Institute for the Arts and Humanities, he served as liaison between IAH and a community engagement class, guiding explorations on how to deepen community at MCLA, including IAH’s Inscapes Poetry Project, which documented student perspectives about sense of place at MCLA and in the Berkshires. He helped support a wide range of other IAH programming, including a Silent Disco event on campus, and launched his own project, Memories Through Matter, which engaged students in storytelling around meaningful objects.

“As an intern with the MCLA Institute for the Arts and Humanities, his quiet leadership and gentle style has guided our work and engaged his peers,” said MCLA Professor of Arts Management and MCLA-IAH Director Lisa Donovan. “Odiase is a natural connector and has taken advantage of every opportunity to connect across communities. In all of his work, Odiase embodies a sense of curiosity, discipline and excellence.”

In the future, Williamson is interested in working in nonprofit arts and culture sector to promote ideas of inclusion, diversity, access, and equity.

In May 2011, the Massachusetts Department of Higher Education launched “29 Who Shine,” a commencement season awards program to recognize 29 outstanding student graduates from the Commonwealth’s public higher education system. Each honoree from a community college, state university or University of Massachusetts campus is nominated by a faculty or staff member, or by a university awards committee. Learn more about the 29 Who Shine awards program here.