During a summer as a research fellow at Yale University’s Beinecke Rare Book
and Manuscript Library, Victoria Papa, Ph.D., found herself immersed in the
archives of modernist authors. 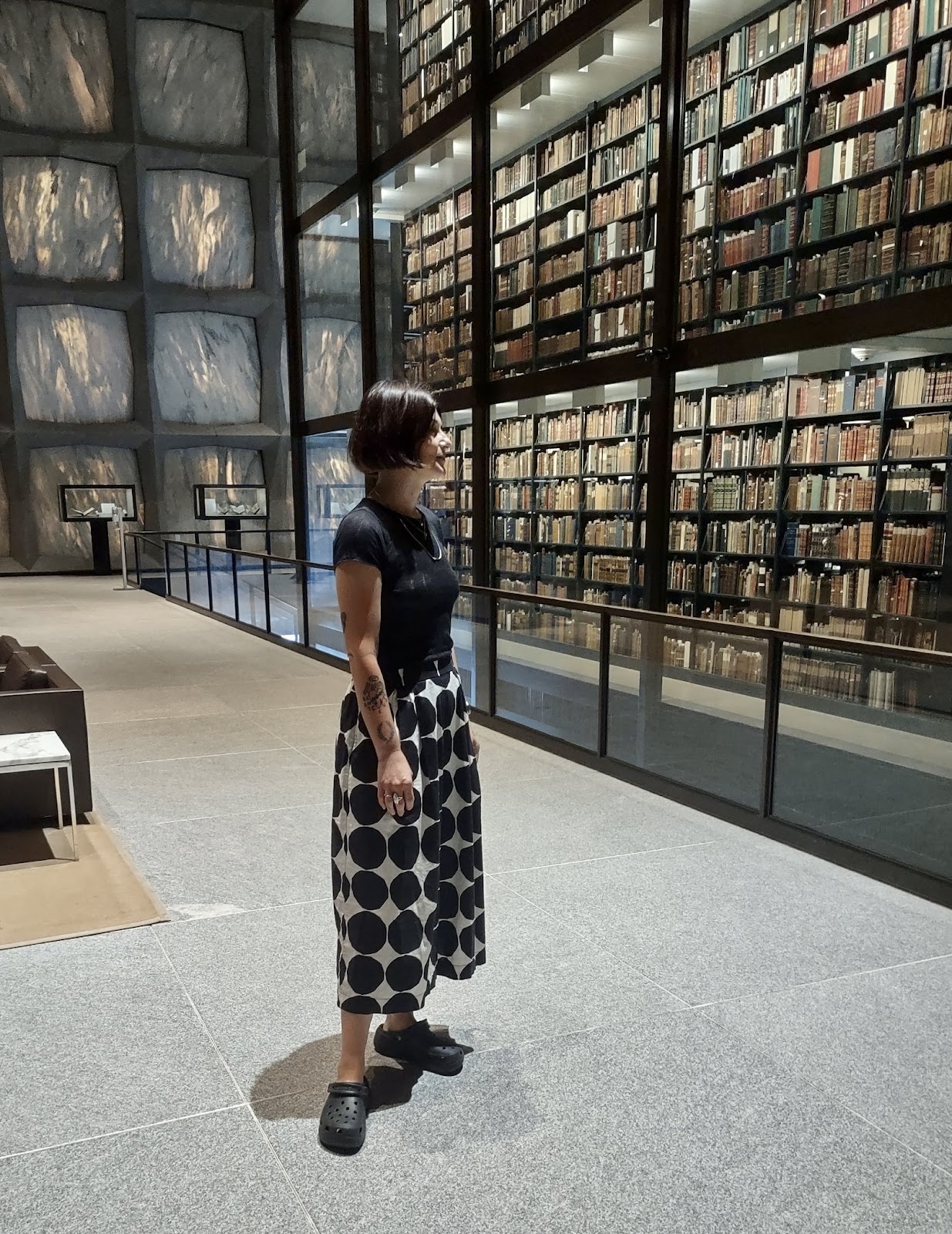 Dr. Papa is Assistant Professor of English​ & Visual Culture at MCLA. Her teaching and research examine the intersections of creative expression and the survival of structural traumas in literature and visual culture from the modernist period to the present. She is a co-director of the CARE SYLLABUS – a public humanities and art project developed in collaboration with MASS MoCA.

The competitive short-term fellowship allowed Dr. Papa to spend three months at the Beinecke after the library had been closed to outside researchers for two
years due to the pandemic. She dove into the papers of writers Zora
Neale Hurston, Richard Bruce Nugent, and H.D., or Hilda Dolittle.

Her goal was to analyze how authors between the 1920s and 1940s wrote about gender, race, systemic oppression and their perspective of trauma influenced by structural conditions.

“In my research, I study how certain modernist writers make use of the creative possibilities of literature to depict the survival of trauma — those that are linked to structural forms of oppression,” Dr. Papa said. “At the Beinecke, I was asking, how were these writers’ life conditions informing their literature? It’s not just about the literature itself but also about how their lived experiences are part of their stories.”

Dr. Papa takes interest in the modernist period due to it being a profound time of artistic expression that reflected the social and political changes of the era. During these years, writers of color, as well as women and queer writers rose to the surface of the literary scene.

The archives she researched included the authors’ letters to friends, manuscripts, and journal entries. In Dr. Papa’s findings on the queer feminist writer  H.D., she dug into how the author worked through the impact of trauma through explorations in the occult, especially tarot and astrology.

“I knew H.D. was knowledgeable about the occult and practiced ritualized forms of magic, but

I didn’t quite realize that these acts were a resource of survival for her that related to her sense of queer identity as well as her time in therapy,” Dr. Papa said.

H.D. underwent psychoanalysis with Sigmund Freud in 1933 and 1934 and remained friends with Freud until his death in 1939. Dr. Papa explained that H.D. corresponded about the occult frequently with friends, but never with Freud as he would have likely been dismissive of those interests.

“What really fascinates me is a dynamic that I see present in H.D.’s archive. She recognizes both psychoanalysis and the occult’s capacity for healing and self-discovery, and the occult was also a playful pursuit filled with joy and queer kinship for her,” Dr. Papa said. “Part of my work now is to integrate this archival research into the draft of my current manuscript.”

Dr. Papa said she is looking forward to sharing her research with her students in the future. She teaches H.D. in her course, Gender and Global Modernisms. She will spend the next year preparing for her publication.