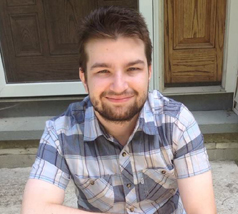 Over the summer, Jordan Darling ’19 of Adams, Mass., was selected to participate in the highly competitive Research Experience for Undergraduates (REU) Program, funded by the National Science Foundation (NSF).

At the University of Rochester in New York for 10 weeks, Darling was part of a research team that worked on a project focused on a very new and unexplored area of physics – warm dense matter. Their project, which was titled “MRI: Development of a Pulsed-Power Driver for the Experimental Investigation of Extreme States of Matter,” involved building a High Amperage Device for Extreme States (HADES).

Darling explained that HADES (illustrated below, right) will be used to pressurize and heat tiny pieces of aluminum until they reach a certain density and temperature where warm dense matter – a type of plasma that behaves differently than normal plasma – exists.

Because scientists believe that warm dense matter may be found inside the cores of giant planets, brown dwarfs, and small stars, “Building HADES will help us understand how these certain bodies form in space,” Darling said. 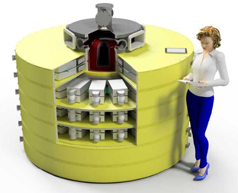 “HADES itself is designed with compatibility and ease of access in mind. It is also designed to be relatively inexpensive and easily transportable so that many different labs can own a HADES,” Darling explained. As a result, other institutes and universities can learn more about the properties of warm dense matter, and explore how it is formed.

For his part of the project, “I mostly worked on building various parts of the machine, such as a circuit board that controls how the machine is charged, and an anti-EMF (electro-magnetic field) container for various electrical components.”

Darling next plans to earn either a Ph.D. in condensed matter physics or a master’s degree in electrical engineering. “Thanks to the REU program, I’ve gained a new sense of determination and confidence,” he said.