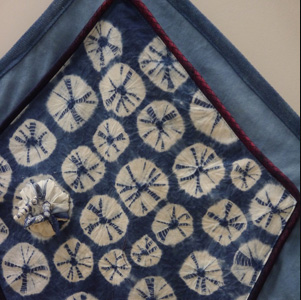 A Few Words About Shibori, Indigo, and Kites

I have been a dedicated maker and shaper of textiles for decades, continually fascinated with the ancient processes used to transform a collection of fibers into a woolen rug, a linen napkin, or a finished garment. Carding, spinning, dying, weaving, knitting, hooking, beading, stitching, embellishing: although the tools and technologies have changed over the centuries, the processes for making textiles have remained constant. Over the years I have worked as a seamstress, a rug weaver, a maker of historical costumes, a docent at a textile history museum, and as a living history interpreter in the role of a textile “mill girl” at the National Park in Lowell, Massachusetts.

I began making the kite-shaped collages shown here as a participant in the “100 Hours in the Woodshed” event at the Makers’ Mill in North Adams, MA in January of 2017.  They are made from indigo-dyed cotton, patterned with Japanese shibori techniques. The collages pay homage to three traditions with deep roots in Japanese history and culture: shibori, indigo and kites.

I was first introduced to the shibori dying technique a couple of years ago and have since become an avid enthusiast. The term shibori, Japanese for “wring, squeeze or press”, refers to a range of resist techniques in which cloth is shaped and bound before dying it, to create a seemingly endless variety of surface patterns. The shibori tradition has been practiced in Japan since at least the eighth century, typically with indigo dye on cotton or silk fabric.

Indigo dye produces a range of blue hues, the most familiar being that of denim blue jeans (now almost exclusively dyed with synthetic indigo). Natural indigo dye, used in these collages, is an organic compound obtained from the indigo plant through a fermentation process. It is one of the earliest known dyes: an indigo-dyed garment dating to 2500 B.C. was discovered during the excavation of Thebes.

I chose to make these collages kite-shaped because of the kite’s rich significance in Japanese culture: It is believed that Chinese Buddhist missionaries brought the first kites to Japan around the seventh century A.D and they continue to play an important role in religious ceremonies and holiday celebrations throughout Japan. The kite embodies associations that are more universally shared as well – a summer day, a stiff breeze, a child running through a field looking skyward. Geometrically speaking, the kite is a quadrilateral, but one that is instantly recognizable as a plaything, an object that rides the wind currents, swoops, floats and soars, much like the bird of prey it is named for. What other geometric shape can claim such happy connotations?

Ann Scott is a Professor of Education at MCLA.

Ann Scott earned a doctorate from the Language, Literacy and Culture program at the University of Massachusetts/Amherst and a B.A. in Comparative Literature from Smith College. Before coming to MCLA, Ann taught at William Patterson University and at Westfield State University.  For several decades, Ann has also pursued her interest in the textile arts as a weaver, spinner, dyer, and clothing designer. She is a member of the North Adams Makers’ Mill, a community studio space, where she often can be found dipping cloth into vats full of indigo dye.